DWP often works with other organisations and companies who help us deliver some of the services we provide. I’m a senior user researcher working on a new service that will help these third parties carry out their work delivering DWP services.

The first release for this service will be for training providers contracted by DWP. When the DWP operational support team asked me to get involved in four roadshows to talk to these providers about how the service will work, it gave me an idea to try a different approach with our user research.

Getting creative with a different approach

Because we would have access to all the training providers (our end users) over a matter of a few days, my idea was to run parallel sessions of different research sessions at each event and have all the users take part in each session.

I jokingly referred to the sessions as ‘user research speed dating’. This is because the idea of quickly rotating around different research activities is similar to the concept of speed dating which, in case you’ve never heard of it, aims to introduce single people to large numbers of new potential partners in a very short period of time.

I’m a great believer in getting as much out of every opportunity as possible and the ‘speed dating’ approach meant that everyone at the roadshows could take part in each research activity. Also, doing it this way would provide me with a rich amount of data that I could then feed back to the wider team to help us to prepare for subsequent releases of our service.

It was a really simple idea on paper, but it did lead to a lot of things that I had to think about:

As well as thinking about these questions, I also wanted to make sure each session used a different approach to help keep users engaged.

The research briefs I developed had to be really comprehensive and detailed as they were going to be used by others who weren’t that close to the project. And because I had different volunteers helping out across the four days, I had to run four briefing and debriefing sessions for the researchers, note takers and observers.

Organising and running the sessions

After much pondering, I decided to rotate the users around the sessions. By doing it this way, the volunteers I recruited to help run the sessions only had to familiarise themselves with one research brief, and by breaking the activities, it gave users a chance to get up, stretch their legs, and mentally take a break from each activity, before starting the next one.

I also decided that three groups doing half hour activities in parallel would work (this was based on the estimated number of attendees per roadshow) and would only amount to 1.5 hours of research. I asked other user researchers in DWP to help facilitate the sessions, and collected written informed consent before the start of the three sessions. 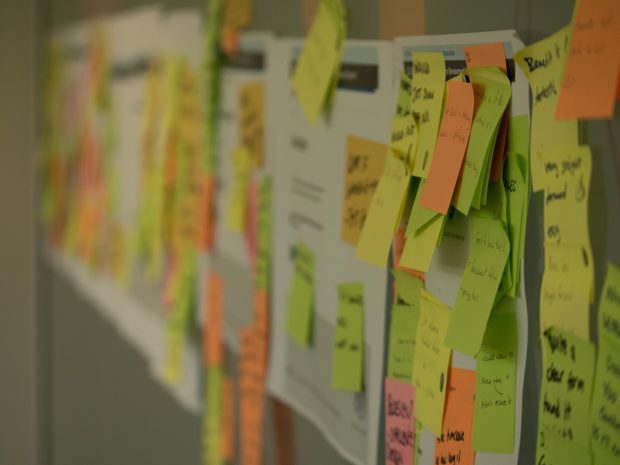 How the speed dating approach worked on the day

To capture the information I wanted on the day, I used the following techniques:

Despite all the preparation and planning, I still found myself flying by the seat of my pants at times! On two of the four days, fewer users than expected turned up so I had to decide on the spot how to manage this by merging two sessions in to one.

As expected, the sessions generated a lot of information. I designed the research with analysis in mind which is making it manageable to digest. But it will take quite a while to do all the analysis.

What I’d do differently next time

For starters I’d definitely take a similar approach as it was a great way of generating a lot of information. However, I would want more control over how close together the events were. One aim I had, but wasn’t able to fulfil, was to progress the ‘user management’ sessions from a card sorting exercise for the first two sessions, to developing a paper prototype to test out with the last two groups.

Using this speed dating approach to user research showed that it’s worth being experimental, trying something new and pushing the boundaries when it comes to new techniques. Working in DWP Digital allows you to be creative in this way. I’d say if you have an idea like this, give it a go!