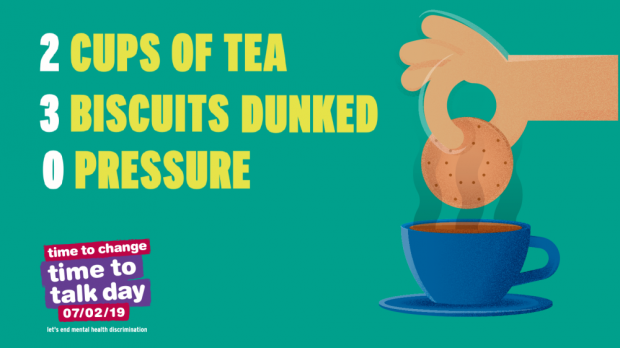 In DWP we want to create an inclusive workplace where everyone feels that they can be themselves. To support this we have an ongoing ‘I can be me’ campaign that aims to get people talking about how being included makes them feel and about helping others feel included too. This is why I’m highlighting Time to Talk Day 2019, held annually on the first Thursday of each February.

Last year I was diagnosed with menopause symptoms – but before my diagnosis I went through ‘a fog of despair’ – with my mental health really suffering. The menopause is a pretty taboo subject, yet it’s something women all go through, so I feel really strongly that it’s something we should start to talk more openly about. The ability to talk about the things that affect our mental health helps people to be happier, work better and have improved wellbeing, so I want to share my experience.

Last year I became very emotional. After a family bereavement, though I was naturally very upset, I was still very tearful several months later. I found myself crying at the slightest things: when the strap on my handbag broke, when my Yorkshire puddings didn’t rise and when I couldn’t find a nice skirt in Marks & Spencer.  I was also crying at work - the very worst time being when I cried because someone asked me to close a window. Looking back, I can see that these incidents were quite ridiculous, and I felt embarrassed at the lack of control I had over my emotions. It left me feeling humiliated, but there was nothing that I could do to stop it.

I also found that I couldn’t talk to people without flushing red and going sweaty. Things I had previously done without difficulty were now causing me problems. I couldn’t concentrate properly and I struggled to do the things that I was usually good at. I was making mistakes in emails, I found that I couldn’t take in new information and had so many ‘bad days at the office’ that I didn’t want to come to work anymore. I even thought about resigning – so in despair, and because I thought I was going mad, I went to the doctors.

I saw a GP who explained that it was fluctuating hormones that were making me tearful and unable to control my emotions and also causing the night sweats which were making me feel exhausted and lose concentration at work. She diagnosed menopause symptoms and gave me information about HRT and herbal remedies.

After weighing up the options and risks I decided to go with HRT. The patches, which I wear, help with symptoms and also protect me against osteoporosis.

They’ve made an amazing difference to my life:  no more crying at work or at life in general, no more night sweats and very few hot flushes.  The fog of despair, which I didn’t realise had been there until it had gone, lifted.

I was 45 when this happened to me – I’d thought I was too young for the menopause, but actually while most women reach it between 45 and 55 it can happen earlier. The years leading up to it are called perimenopause and this is when symptoms begin.

I never knew that the symptoms of menopause were more than just ‘hot flushes and night sweats’. My hot flushes had started when I was 43 and though I didn’t know it at the time, this was the start of my mental health decline. But it was so gradual that I never noticed the changes until I couldn’t cope.

It’s important to talk about what you are going through. I’m feeling so much better now and my mood is noticeably different, but telling my colleagues about my symptoms and the HRT have really helped. People have been very supportive. It can be a bit daunting talking to men about it, but my experience is that lots of my male colleagues have female partners who are going through the same, so they are understanding.

Sharing my personal experience has been liberating. I recently gave a talk about my menopause experience at a DWP Women in Digital conference in Leeds. During the talk I showed Rosalind Jackson’s TEDxDayton Talk, The Woman You Become. She’s an American Obstetrician Gynaecologist, and in this talk she shares her candid views and some interesting facts and figures about the menopause and how it can affect women.  And I’m hoping this blog will help people to open up more too!

If you’re feeling low – whether this is due to a health-related condition like the menopause – or something else, don’t struggle on your own. Make sure you talk to somebody, whether it’s a friend, family member or doctor. Use today to take time to talk.

Find out more about DWP Digital

Find out more about what's happening in DWP Digital: Subscribe to this blog, follow us on Twitter @DWPDigital and look at our LinkedIn page to see our latest jobs.